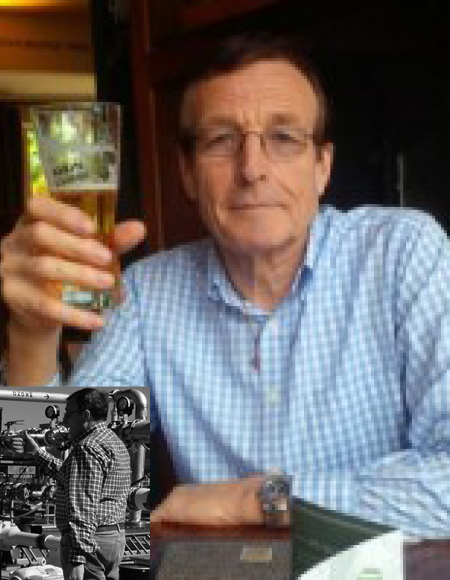 In early July 2012 I underwent an obligatory medical. The company appointed doctor advised me that I was considerably overweight and for him to approve my promotion I would need to reduce my BMI from 30.2 to an acceptable index 22.

Living in the USA for three weeks out of four for the previous 4 years, I had fallen into the fast food, no exercise way of life and knew that I was overweight but had not considered the penalties.

At that time I travelled a great deal both within the USA and worldwide so how to lose weight. I did some research on various diets and weight loss resources but most seem to lean towards those who spent the majority of their life at home with little travel and were in a position to buy low calorie / low fat ready packaged meals. Eventually I stumbled across the Nutracheck site and liked what I saw as it put me in control.

Initially I played with controlling my calorie intake but by May 2013 I had only come down to 15st 6lbs219lbs99.5kg and received another reprimand from the doctor.

I decided that time had come to be sensible so from early June 2013 I started to religiously record my calorie and fat intake, I increased my exercise and weighed myself on a regular basis.

During the weight loss period I was in frequent contact with Nutracheck asking many questions and passing on anecdotes.

How to weigh yourself accurately while away from home? As I was flying every 2 to 3 days the answer was use the baggage scales at the airport.

With weight loss comes size reduction, how do you manage clothes size without vast expense?

While in the USA how do you manage portion size? Order children's meals if allowed if not eat half of what is on your plate leave the rest.

When at home weigh everything so you can judge portion size when eating out.

Drink lots of fluid - apart from improving your heath and assisting with weight loss it helps reduce weight by increasing exercise in finding a toilet more often!

Don't use the elevators even if its 10 floors - in high rise buildings get the lift to half way and walk the rest.

When waiting at airports don't go to the lounges spend the time walking fast around the terminal.

I was also asked by my doctor to record blood pressure on a regular basis as he wanted to see if weight loss would get my blood pressure down to a normal level from the initial 158 / 89. To my delight it dropped steadily finally reaching 115/76 by the time I achieved my target weight - once again I could climb mountains both physically and mentally.

Between November 2013 and September 2016 I maintained my weight around 12st 6lbs176lbs80kg with a few peaks and troughs - but then life took a dramatic change.

Two years on, I am still at or around my target weight

Life throws a curveball, which takes its toll

Whilst on holiday in Peru, my friend Naoki became unwell and on our return to Japan in November 2016 he was diagnosed with cancer.

For the next 3 months I spent my time flying between the UK, Hong Kong, Singapore and Japan eating on the fly, grabbing food of any nature while trying to fit in frequent visits to hospital, instead of exercise I jumped taxis and trains to minimise time away. I very rarely recorded what I was eating and gave up weighing myself.

Stress took its toll and the more tired I got the less I cared about my well being and weight.

By April 2017 my weight had crept up to 13st 6lbs191lbs86.9kg however around that time the Doctors told me that my friend was responding very well to treatment and the prognosis was good so my outlook changed from worrying about, to looking forward to, the future and to do that it meant looking after myself, reducing my weight, doing more exercise and eating sensibly.

Once again I turned to Nutracheck and after an exchange of e-mails I got back on track.

At this point life dealt another blow as on the 29th August in her 108th year my mother passed away. Over the previous 30 years or so I had returned from where ever I was in the world on a monthly basis to the UK to see her - suddenly a big void existed.

Although this was a significant change I managed to maintain my diet with a couple of wobbles and once again stabilised at my target weight.

I had previously planned to return to Peru in mid September 2017 with Naoki to see his grandmother and rather than cancel I decided that my mother would have wanted the trip to go ahead as planned. While in Peru I again lost track of my weight as portion sizes are very hard to judge and food is very different, and some foods certainly not on the Nutracheck list of foods, I was not even sure of what I was eating on occasions! On my return to the UK in mid October my weight had crept up to 13st 2lbs185lbs84 kg.

This time it was easy to revert to recording calorie and fat intake and the exercise regime cut back in and by the end of October was down to 12st 9lbs180lbs82kg.

Delivered another blow, but every cloud!

On the 29th October life dealt a further blow, after 69 years without any illness I was rushed to hospital with a life threatening condition that required immediate invasive surgery.

Luckily, although slightly above my target weight, my overall fitness was good and my heart strong and in spite of being on the critical list I astounded myself and the medical staff by being able to get up and walk around the ICU ward the morning after the operation all be it with many tubes attached.

My surgeon told me that there was no doubt in his mind that had I not been as fit as I was it would have dramatically increased the likely hood of complications.

As it was I was discharged from hospital five days after surgery with strict instructions to take it easy - not in my vocabulary so started walking to build up my strength, 1 km day one 2 km day two.

On the 11 November I noticed that my clothes were now hanging loosely and for the first time since I was discharged I weighed myself only to find that I was down to 11st 9lbs167lbs75.9kg, the next day 11st 8lbs166lbs75.7kg and subsequent days the drop continued until I got to 11st 7lbs165lbs74.5kg kg on the 16th.

Again I turned to Nutracheck but this time not for advice on how to lose weight, but the best way to initially maintain then gain weight back to my target.

As on all previous occasions they came to my rescue giving advice on what and when to eat and in a total reversal to the weight loss scenario told me to eat handfuls of nuts and seeds, dried fruits, full fat dairy foods including whole milk, full fat yogurts, cream, cheese, peanut butter, creamy sauces, avocado, chocolate, full fat latte/ hot chocolate drinks.

They told me that I need to temporally change my mind set that had pulled me through an initial 3st 6lbs48lbs23kg weight loss followed by a long period of maintaining then through the ups and downs of life that cause wobbles, which with the assistance of Nutracheck I had overcome.

Taking there advice the weight loss slowed and stabilised around 11st 8lbs165lbs74kg which is where it has remained, exercise is back up to 10 km/day and blood pressure back to an average of 115/72.

A month on after surgery I was well on my way back to normal, whatever that may be!

In December I returned to Japan and was immediately told that I was too thin, something I never thought I would hear!

Because of this I spent a very pleasant Christmas and New Year in with family and friends eating some of my most favourite dishes although I did decide to give the Yakatori raw chicken a miss until my body fully recovers.

My weight gradually increased reaching 78 Kg mid-January however this came with a further twist to the story the wound started to hurt and when I spoke to my doctor he told me to lose weight again back down to around 74kg or 75kg as the increase was putting strain on the not fully healed wound and I should leave it at least 5 or 6 months before increasing back to 80 kg but also said that I might stabilise at 74 kg and be happy with that - if I do more expense again - smaller clothes!

So now for the future - only time will tell how quickly I will recover fully but recover I will and sooner rather than later.

I would like to get back to 80kg as I was in the picture below but I will let that happen in the fullness of time .

I will continue to use Nutracheck as the financial cost is far outweighed by the advantages and there is no doubt in my mind that without my weight loss back in 2013 and the inherent improvement in my fitness levels this could have been a very different story.

Try us FREE for 7 days

* Weight loss is individual and your personal rate of loss may vary from any case studies shown on this website.