Can the texture of food fool us about its calorie content?

In a recent study by the Journal of Consumer Research, scientists researched the effects of different textures on the way we perceive the calorie content of foods.

Two control groups were asked to watch TV and each given a box of brownies (it's a hard life for some!), the idea being that the subjects were not focusing solely on what they were eating. Half of each group where given soft brownies and the other half given hard brownies – both containing the same amount of calories. Group 1 were asked to choose which brownie had the most calories, group 2 where not asked about calories at all.

The results showed that group 1 (the group asked to focus on calorie content) consumed more of the hard brownies, whereas group 2 consumed more of the soft brownies. So what does this mean? The study implies that people believe foods that are hard have fewer calories than those that are soft. The authors of the study concluded that "Understanding how the texture of food can influence calorie perceptions, food choice, and consumption amount can help nudge consumers towards making healthier choices". They are implying that food manufactures can use this calorie perception to their advantage and promote healthy products by creating foods with a hard texture.

As you may know a vast amount of research goes into the production of foods and the science behind our food choices – in fact there is a scientific journal completely dedicated to it. A review of a number of studies published in Appetite back in 2012 concluded that foods that are thick and have a creamy texture left people feeling fuller regardless of their calorie content. 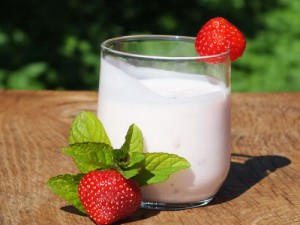 What does this mean to me?

We can trick our body into thinking we are consuming more calories than we really are! A low fat yogurt drinks could be a great way to stave of hunger pangs, they are thick and creamy and would therefore leave you feeling fuller for longer whilst being relatively low in calories.

Food manufactures can use the science behind textures and tastes to work to their advantage, but who is to say that we can't do the same? Choosing snacks that will leave us feeling fuller for long, but are still low in calories here are some examples of low calorie yogurt drinks: